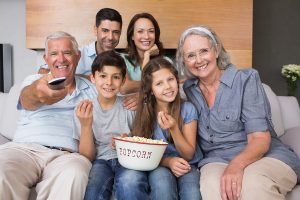 Have you ever had one of those days where you feel like you must be the only person in the world who is dealing with being a caregiver? That’s a common situation for family caregivers. They may feel like all their friends are off living exciting lives with interesting jobs while they are stuck spending all their spare time with their aging relative. If that sounds familiar, it’s okay. Many caregivers feel isolated. While the best way to deal with that is to get out and spend some time with other people or go to a caregiver support group meeting, sometimes that’s not possible. If that’s the case, consider popping in a movie that deals with the caregiver experience and reminds you that you’re not alone. Below are 4 movies that include storylines of caregivers.

#1: Still Alice starring Julianne Moore, Alec Baldwin, and Kristen Stewart
This 2014 movie stars Julianne Moore as an accomplished linguistics professor with a good marriage and three adult children. Alice begins to exhibit signs of dementia, like forgetting words. Her doctor diagnoses her with early-onset Alzheimer’s disease. She and her family are forced to confront the challenges of the disease and what the future holds for them while also trying to make the most of the time they have left.

#2: The Theory of Everything starring Eddie Redmayne, Felicity Jones, and Tom Prior
The Theory of Everything tells the story of famous physicist Stephen Hawking who was diagnosed with amyotrophic lateral sclerosis (ALS) at an early age. Though the movie is about Hawking, it also deals with the caregiver experience through is wife, Jane Wilde, who was also a student at Cambridge. Wilde marries Hawking despite the fact that he has been given only a few years to live. Wilde sets aside her own aspirations to serve as a full-time caregiver to Hawking.

#3: Beginners starring Ewan McGregor and Christopher Plummer
This movie is a father-son story about an elderly man, played by Plummer, who is diagnosed with terminal cancer. McGregor plays his son who finds himself supporting his father even though they had not been close in the past. This film shows the difficulties in caring for an elderly parent when the relationship is strained, a situation many real-life caregivers find themselves in.

#4: The Descendants starring George Clooney, Shailene Woodley, and Amara Miller
The Descendants is a story about a man raising his teenage daughters after his wife is in a boating accident that leaves her in a coma. The movie deals with some of the end-of-life issues that caregivers sometimes find themselves involved in. It also looks at the emotional responses husband and children have to the mother’s accident and shows that there is often more at work in how people deal with a crisis than just the situation itself.

If you are considering hiring caregivers in Layton, UT, for an aging loved one, please contact the caring staff at Seniors Helping Seniors of Ogden, UT. Call today 801-821-4535.